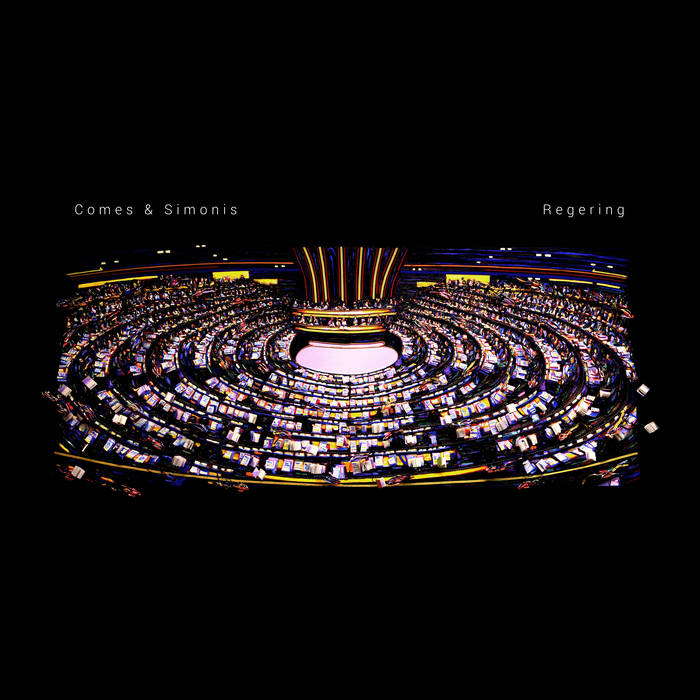 With the album ‘Regering’ (dutch for ‘Government’) the duo Martijn Comes and Lukas Simonis release their first record together. The title and track names are derived from the works of B. Traven (aka Ret Marut), which says something about the atmosphere of the work and the way it was constructed. Although there are signs of Traven’s criticism of capitalism, freed of blatant moralising, there is also a sense of nostalgia as far as the atmospheric side of the music is concerned. A longing for the days when social media and the lot were not involved in the struggles for justice and freedom. Of course this is ‘only music’, and how can you criticise anything by just making sounds and suggesting an aural world that goes beyond that? That being said, listening to this ambient meets improv meets film-score album is its own reward, so it may be best to let the listener decide.

Martijn Comes comes from a film-score background while also moving in circles of experimental electronics, ambient and drones. Lukas Simonis is a seasoned improviser/sound artist with a post-punk edge.

This release is available as digital download/stream and as a limited edition CD in a 3-panel cardboard sleeve, with an impressive painting by visual artist Daniel Verkerk on the cover. When the predominantly black cover opens up, the painting is revealed in closer detail, splashing over all three inside panels in radiant colour. This is a co-release with Esc. Rec.

First reviews coming in! (translated from the dutch);

Two musicians from different corners of the musical spectrum start jamming in order to eventually arrive at compositions that involve more than the sum of its parts. That is pretty much what happens in the collaboration of Martijn Comes (piano, organ, synth, electronics) and Lukas Simonis (guitar, effects, synth). The result was released under the title Regering by the Deventer,NL based Esc.rec label.

Comes has a background in film scores and has researched popular, modern and classical music. His own music can often be categorized under ambient and drone, but in fact he works on a heterogeneous oeuvre, in which he also incorporates melodies or impulses in his soundscapes, although he sometimes also goes for layered minimalism, such as on the great Interrogation Of The Crystalline Sublime. Simonis is a guitarist who is at home in improvised and experimental music and alternative movements within the rock genre. He has appeared with Dull Schicksal, Trespassers W, AA Kismet, Coolhaven and Ig WItzelsucht, among others. And with Zoikle, whose strong debut album was only released last year.

The two musicians met several times in the period 2018 – 2020 and recorded their music in the L6S Studio and the WORM Studio in Rotterdam. The album title and the titles of the six pieces that make up Regering are based on the work of B. Traven, a writer publishing in German who most likely also wrote under the pseudonym Red Marut. Much of the writer’s life is shrouded in mystery and he did not really help himself by never giving interviews. If he is indeed who he is believed to be, then it is possible that he took part in the Bavarian Revolution in 1919, was sentenced to death, escaped and fled to Cologne.

The mystery that surrounds the writer is also somewhat in the music of Comes and Simonis. There are clearly elements of ambient and drone music present, but the music of the pair also contains so many aspects that indicate other genres, or cannot be categorized at all, that any indication falls grossly short. It does not make the music easy to fathom, but that is okay, because Regering is a feast for the ears even without wondering what exactly you are listening to. The six pieces differ and there is no simple soul to be found. The music sounds adventurous and at the same time purposeful.

The duo resides between lightness and heaviness in Opstand der Aanhangigen. A floating tone, which is occasionally swept towards a different pitch, neutralizes the playfulness that the piece carries (pleasant rhythm, tingling free guitar playing). Most sounds disappear after a few minutes. The rhythm remains intact and is now provided with more elements. That persistent pattern has a trance-inducing effect. Variation is applied with subtle sounds, without disturbing the pattern.

Laffe Epicus starts whispering softly and excitingly. Strange sounds are draped over a soft drone and also soft and slow rhythmic pattern in the background, seemingly random. The volume quickly increases, as does the number of layers, bringing the tension to a boiling point. There is something evil in the music that comes straight at you. Rotating movements pass at different tempos and a drone consisting of a full organ sound can be heard. The duo has got hold of the listener and won’t let go.

Very adventurous it is in Ouverture voor een Einde. Just like in Opstand der Aanhangigen a light-footed rhythm is heard, now overlaid with guitar, sliding synth sounds and drones. Together they could form a futuristic-looking whole, but that ever-present rhythm places the music in the here and now, with both feet on the ground. A melody emerges, skillfully disrupted by Simonis’s guitar playing. Gradually the course changes, the rhythm disappears into the background and an organ tone predominates. Subsequently, the disruption becomes increasingly severe.

A pitch-dark tone sets in motion Ijzingwekkende Weegschaal. That drone pulsates, while in the depth sounds fly around teasingly. New elements emerge from the darkness: a moving motif, sounds rising and disappearing like thunder clouds, sounds moving unpredictably like strange creatures, a rhythm that sounds like a slow moving train, electronic sounds that are reminiscent of nature sounds from the jungle, long guitar sounds, a machine-driven rhythm, etc. Everyone will have different images within their own fantasy. There is no question that the music has a strong imaginative power. Moreover, the piece is exciting.

In Er is maar een Nergens (There’s Only One Nowhere) the basis is formed by a two-movement, slightly distorted piano motif. Around this, Comes and Simonis manage to create a range of sounds, such as percussive sounds and sounds reminiscent of a circular saw in the carpentry workshop or unidentified flying objects. The duo plays with density: sometimes the overall sound is fairly bare, at other times the space that is offered is more filled. The piano motif is the ideal breeding ground for all kinds of experimental discoveries and the wealth of sounds and movements is therefore great.

Closing piece De Verloren Zaak (The Lost Case) then sounds as if the pair have freed themselves from the yoke of the piano motif: sounds emerge from every nook and cranny, together creating an incoherent rhythm, free and playful. The piece is all movement and moves in all directions except straight ahead. The music is colorful and the drive is great. Gradually elements are brought in that dampen the nervosity, some puzzle pieces fall into place, while others keep flying around elusively. It is a piece of music in which so much is happening that you simply cannot get bored.

That last comment actually applies throughout the album. Regering is a festival of sounds that makes a big impression in its originality, diversity, creativity and quality.

Martijn Comes and Lukas Simonis are two names that I regularly see and hear over the years. But they never made an album together before. That is about to change.

Comes is a Dutch graduated composer who has a special interest in sound character in different musical traditions, which in his releases translates into electro-acoustic music, drones, ambient, neoclassical or combinations thereof. Many of his works, which have been released on Moving Furniture, The Silent Howl, IO SOUND and Bedouin Records, among others, also have a cinematic character. This probably has everything to do with his study Composition for Film at the Conservatory of Amsterdam. Before that, he has already graduated from the Academy for Digital Communication. Besides many solo albums he has also made works with Orphax, Giulio Aldinucci and Hessel Veldman and there are albums in the air with Frans de Waard.

The Dutch guitarist Lukas Simonis has been on the road for some years now and comes from roughly the opposite corner with alternating art rock, punk, industrial and avant-garde. He has played a large part in the Rotterdam alternative corner, also as a programmer for WORM. Groups such as Dull Schicksal, Trespassers W, AA Kismet, The Rosebuds, Zoikle, Morzelpronk, Coolhaven, Apricot My Lady, Vril and many more have been able to count on his contribution. Later he started to focus more and more on experimental improvisations, which again resulted in extremely interesting releases. For example, I have a great collaboration with Pierre Bastien on the shelve. But a lot of great things can be found in his impressive discography.

As Comes & Simonis, sounds so nice together, they present their first joint album ‘Regering’ (Government), released on the innovative label Esc.rec. This title immediately appeals to me as a writer for het Schaduw Kabinet, but it also makes me curious about the content. This (fortunately) has nothing to do with the current formation of a new government, but just like the album titles, this one is taken from the work of the somewhat mysterious B. Traven aka Ret Marut. Comes throws in synthesizers, piano, organ and African percussion here, while Simonis takes off with guitars, effects, analog synthesizer and blippoo box. The composer versus the improviser, but here above all coming to a fascinating com-pro-mass, yes, leave that to Comes and Simonis. The six compositions that they serve here in a good hour are written from 2018-2020. From the very first notes, they already manage to keep me in a headlock. The CD opens with Opstand Der Afvalligen, where you hear a controlled mysterious, almost tribal ambient sound, throughout sounding guitar improvisations. But even after that, both manage to challenge each other and to fabricate the most fascinating creations, where improvisations, electro-acoustic music, ambient and all kinds of experiments pass the review in a varied and surprising way. Although the approach of both is different, their sounds are bundled into one whole and do not run parallel to each other. Because you do hear that different input, it gives a great spatial effect, where sounds seem to arise or echo again in the void. Think of it as a specially created grid, through which sounds fly, collide, become intertwined and also distort the grid again. However, that can sometimes produce frightening shapes, as in Laffe Epicus and Ijzingwekkende Weegschaal. I regularly think of that oppressive atmosphere of David Lynch’s Eraserhead, albeit with modern music. Music that is not always pleasant, but of which you do not want to miss a second; there is so much interesting to discover. It has become an immersive, unparalleled and adventurous listening trip!